HARRISBURG – The Senate Law and Justice Committee, chaired by Sen. Mike Regan (R-York/Cumberland), approved legislation that would allow restaurants, bars, taverns, breweries and hotels with outdoor seating to have music during certain hours.

The legislation, sponsored by Sen. Kristin Phillips-Hill (R-York), was introduced after many locally owned businesses were impacted by the COVID-19 pandemic and subsequent shutdowns. Many restauranteurs invested in and expanded their outdoor seating options to ensure the safety of customers and staff during COVID-19 restrictions. The provisions in the legislation expand outdoor music options and limitations already available to wineries to all liquor license holders, including bars, taverns, restaurants, hotels, clubs and breweries.

“As these businesses look to get back on their feet, we can do more to cut the red tape and allow them to use these outdoor spaces to generate more revenue and allow greater experiences for their guests,” Phillips-Hill said during the committee meeting.

“The type of liquor license a business holds should not put them at a disadvantage in this scenario,” stated Regan. “But that has been the situation with these businesses wanting to host outdoor music events, and this bill levels the playing field.”

Since 2019, wineries have been allowed to have similar sound levels during certain hours.

The legislation advances to the Senate for its consideration.

At a hearing held on Monday the Senate Law and Justice Committee heard from medical marijuana industry professionals and advocates, including patients, physicians, and former regulators from neighboring states, about the oversight of the Medical Marijuana Program and how a new, independent entity is needed, especially as Pennsylvania moves towards legalizing adult-use marijuana.

Chairman Mike Regan (R-31) said the committee’s third and final hearing on forming an adult-use market in Pennsylvania focuses on the successes and failures of the Department of Health’s Office of Medical Marijuana.

“I appreciate learning more about this, so that we can help Pennsylvania’s 600,000 medical cannabis patients and caregivers while also formulating an oversight structure for adult-use that will be well-regarded for its desire and ability to work with the industry and advocate for its success,” Regan said. “Legalization of adult-use cannabis is a complex and obviously, controversial issue, so we are grateful for the many perspectives, personal experiences, and opinions we have received.”

Hearing participants said Pennsylvania must update its program to better reflect emerging trends and understanding of how medical cannabis works best – from eliminating the list of approved medical conditions to solidifying regulations and to hiring more knowledgeable, communicative staff.

“It is clear that we cannot maintain the current oversight authority for an adult-use cannabis program,” Regan said. “Unless the Office of Medical Marijuana is going to take action to address some of the issues raised today, we need to act sooner rather than later to establish an adult-use program and a new regulatory agency.”

The Senate Law and Justice Committee convened Monday to discuss the successes and failures of adult-use marijuana programs in other states as Chairman Mike Regan (R-31) continues drafting similar legislation for Pennsylvania.

“I want to fully understand which states are models of success, which ones we should look to for guidance on specific aspects of establishing an adult-use cannabis program in Pennsylvania and which states have failed in one way or another,” Regan said. “It is not necessary for us to go about this blindly when 18 other states have navigated the process already.”

Participants pointed to Illinois and Arizona when considering how to help medical marijuana growers, processors and dispensaries transition into selling adult-use product as well. Michigan and Massachusetts were likewise recognized for their competitive tax structures that achieved both affordable pricing and shrinking the illicit market.

Regan reiterated that Pennsylvania’s program must also address DUI and workplace safety concerns and ensure that its medical program remains successful, while still providing opportunities for smaller and disadvantaged applicants to enter a new adult-use market.

“I am cognizant that the legalization of adult-use marijuana is concerning for many members, but as more surrounding states legalize marijuana, we cannot sit idly by,” he said.

As neighboring states adopt adult-use laws, residents may flock across Pennsylvania’s borders to buy product, taking their tax dollars with them. The Independent Fiscal Office has estimated that tax revenues from adult-use marijuana sales could generate between $400 million and $1 billion in Pennsylvania.

“In turn, they will be contributing to the tax base of those states and helping to pay for their roads and bridges while Pennsylvania deals with the implications of purchases brought across state lines without the revenue or resources in our legal system to address them,” Regan said.

To watch the hearing in its entirety, click here. 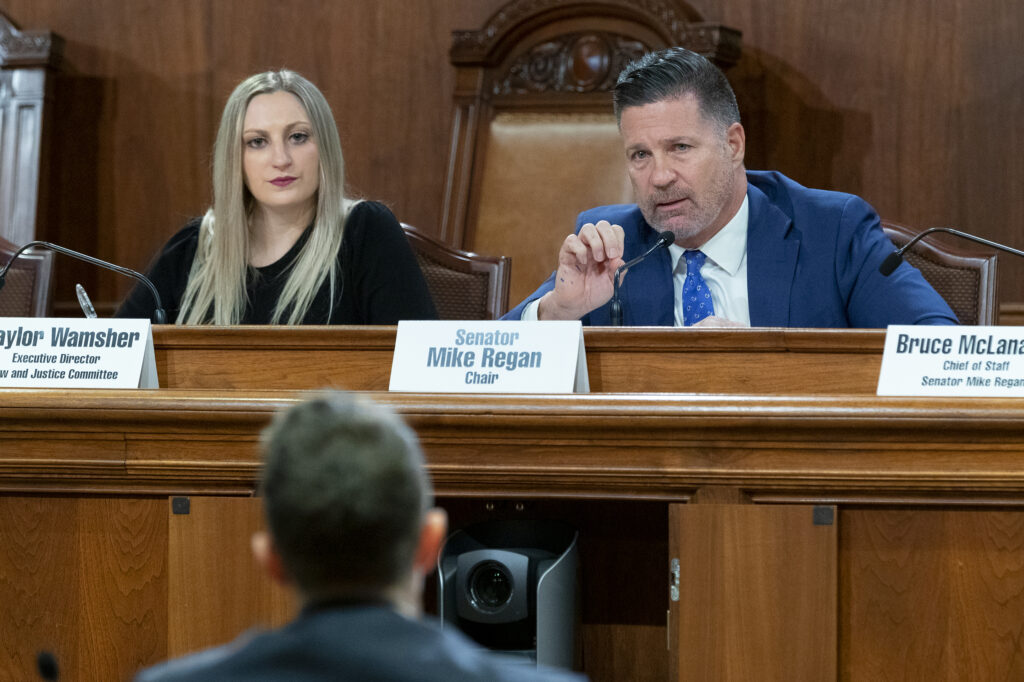 HARRISBURG – The Senate Law and Justice Committee on Monday heard from state and local officials, law enforcement and medical marijuana dispensaries about the impact regulating adult-use cannabis could have in Pennsylvania.

“Obviously, marijuana is not new,” Sen. Regan said. “It is already out there. It is already being used by millions of people – young and old, far and wide. But in doing so, they are putting billions of dollars into the hands of violent criminals, and they are risking consuming a product that could be laced with substances such as fentanyl, crack cocaine, embalming fluid or even mold, fungus, or other unknown pathogens.”

He reiterated that without legalization and regulation, the black market for marijuana will only proliferate.

“That is why my focus is on bringing down illegal drug operations, providing Pennsylvania adults with a safe product, and keeping revenue within the Commonwealth instead of it going to our neighboring states with legalized adult-use marijuana or worse – to organized criminals, gangs, and cartels,” said Sen. Regan.

The Independent Fiscal Office estimated that legalizing cannabis for adult-use could generate between $400 million and $1 billion in tax revenues the state could use to fund state police, crime prevention and after school programs for disadvantaged youth.

Regulating marijuana would not only improve quality, but also diminish the illicit market and give residents a way to legally and safely access the drug, said Philadelphia area state Rep. Amen Brown (D-190), who is working with Regan to solidify legislation on the issue.

District attorneys, meanwhile, told the committee that illegal drug sales, many of which include cannabis, are often prone to violence. They both cautioned, however, that “many issues” underly the spike in crime noted across the Commonwealth. Problems with DUI enforcement are also still a concern, as well as legalizing what’s been long suspected to be a “gateway drug.”

Medical marijuana dispensaries said regulating cannabis for widespread adult-use would help crack down on tainted products and give law enforcement a way to track bad actors.

Sen. Regan thanked the participants for their perspective on the issue and said the next committee hearing will focus on laws other states have enacted to permit adult-use.

“I believe my colleague Representative Amen Brown said it best recently that it is important for us to work with law enforcement on the issue of legalization to make sure we are not in conflict and to ensure the safety of officers and our communities,” Sen. Regan said.

HARRISBURG – The Senate Law and Justice Committee will host a public hearing on Monday, Feb. 7 at 10 a.m. in Hearing Room 1 of the North Office Building to discuss legalizing adult-use marijuana in Pennsylvania.

In a recent op-ed, Sen. Regan pointed to the success of Pennsylvania’s medical marijuana program that he helped craft as a member of the House of Representatives in 2016. Since its inception, the state has registered more than 500,000 patients and caregivers into the program, which has changed the lives of so many through the safe and effective use of medical marijuana.

“I want to build off the success of that program while ensuring its continued viability for the industry and its patients,” said Sen. Regan. “We must also make sure that Pennsylvanians receive their fair share from the sale of adult-use marijuana, not the cartels and gangs whose profits are comparable to Fortune 500 companies.”

The hearing will be livestreamed at law.pasenategop.com.